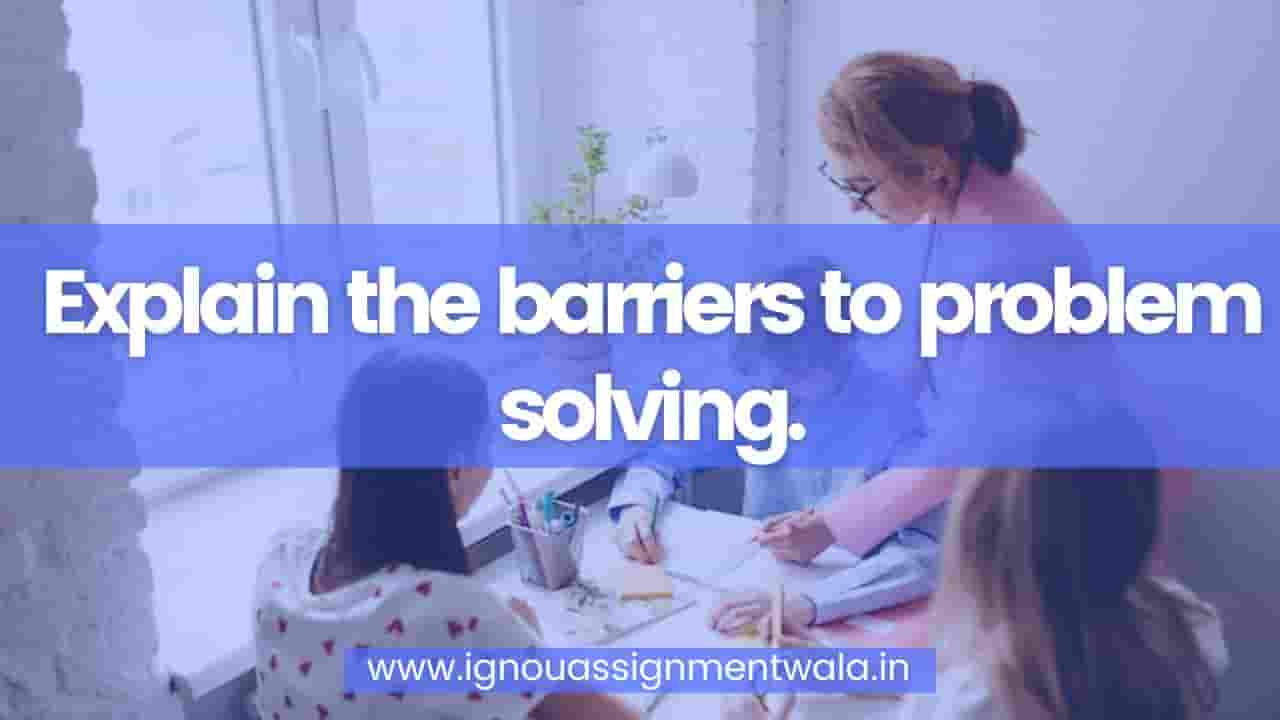 : Different blocks, and combinations of these result in a range of barriers to problem solving. There is no definitive way to link blocks to batTiers but some suggestions are provided below.

This is about not following the problem solving method, and so introducing bias. This can be tile result of missing steps out, or not using them connectly. Confimation Bias mises when the approach taken is to confirm a preconceived solution.

Basically, you would have found the solution before you found the problem, and perceive the problem solving method through this lens (perspective and intellectual blocks). For example, if you feel you already know everything about the problem, you won’t perfom1 research, or only research things that confinm the appropriateness of the solution you want to use.

This comes from relying too heavily on heuristics – the cliches of problem solving, like a ‘rule of thumb’ or ‘common sense’ as a way to solve a problem, rather than actively looking for the best or simplest solution.

It is about reusing what has been successful in the past, rnther than assessing and evaluating the problem.

The heuristic for mental mind set could be called ‘why reinvent the wheel’. It relies on previous experiences to direct how a problem can be solved. This could be an intellectual block, as the   problem solver is not prepared to lean new problem solving skills, and emotionally relies on  familiarity to feel comfo1table with a solution.

This is about not thinking creatively. It is a naiTow mind-set. Functional Fixedness comes from people thinking that an object has only one function.

For example; a jug can only be used to pour fluids; it can’t be used as a mixing bowl. It can be summarized as ‘You can’t do that’. Functional Fixedness affects the time taken to make a decision. If you don’t have a mixing bowl, but won’t use the jug, you waste time going to buy a new mixing bowl. Because it relates to objects, often caused by an intellectual or environmental block.

This baiTier causes unwairnnted boundaries to be placed on a problem. It links to trying to solve a problem using previous experience of what has worked in a sih1ation and trying to force it to work in the cmTent situation, rather than looking for a new solution.

This inhibits creativity. The banier can be removed by insight. Most problem solving methods focus on developing insight into a problem – through info1mation gathe1ing, evaluation and assessment.

This is inf01mation that is not needed to solve the problem, often caused by people diverging from the problem itself, onto other topics they feel are related or presenting too much info1mation.

Irrelevant info1mation hinders problem solving as it slows the process down, can cause confusion  or misunderstandings.

A brainst01ming session can be impaired because people want to go off topic. This is why many brainstonning sessions have a facilitator to get things back on track. When gathe1ing information, it can be getting distracted and looking at something that is interesting but not useful. It can result in too much info1mation being collected, and people having trouble absorbing it.

For example, giving a problem-solving group full copies of all the information found, rather than smnmarising it as headlines, a graph or a mind map.

This could be an expression block – people snuggle to summarise the infornation, an emotional one – people fear they won’t have enough information, or even a cultural one – full papers are always presented in meetings.

There are a rai1ge of ba1·1iers to problem solving based on cognitive blocks and practical social and physical jobs. These can be perceptual, emotional, intellectual, expressive, environmental, cultural.

Cognitive blocks are om ways of thinking and feeling. These contribute to how we approach ai1d carry out problem solving, leading to bai1iers. They usually intrduce bias, enors, and result in

imperfect solutions. These barriers can be removed by awareness of the pitfalls in problem solving, and training in how to use a problem solving method correctly.