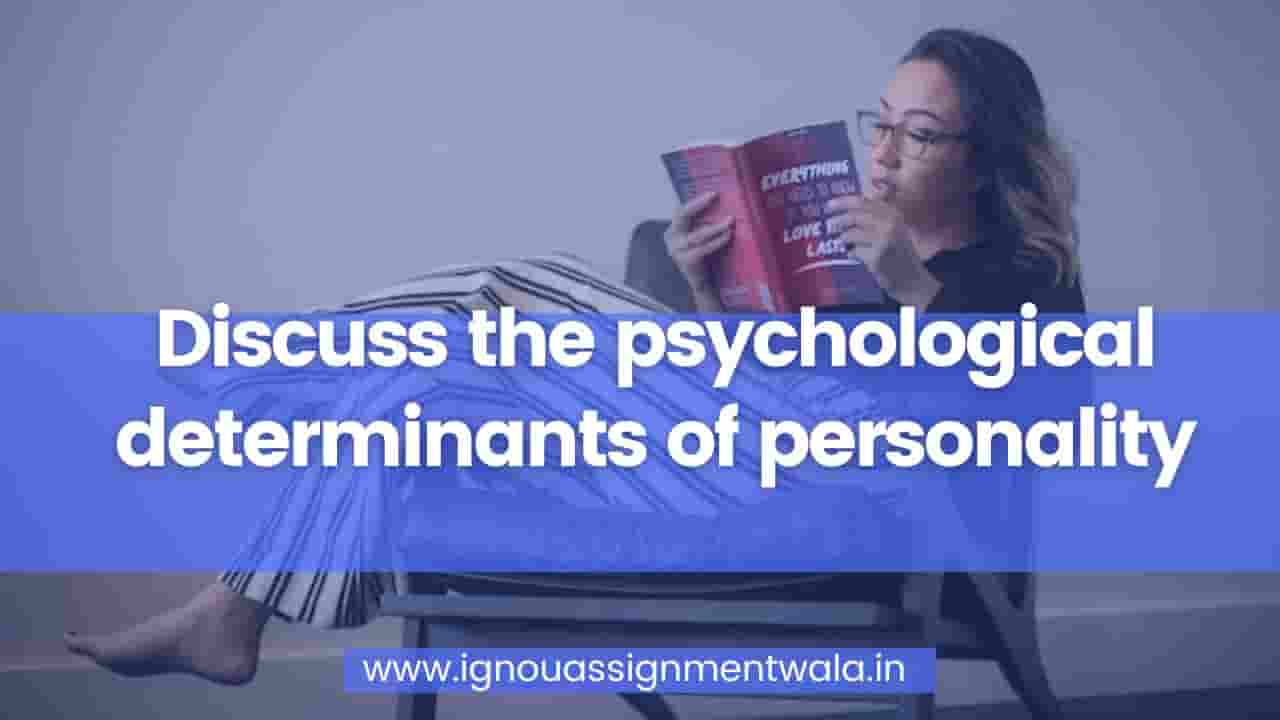 Discuss the psychological determinants of personality

Personality can be defined as an individual’s experiences, values, habits, and attributes collectively influencing behavioral patterns.

The word personality is derived from the Latin word “persona,” which can be translated as “mask.” It has been discovered by psychologists and social theorists that personality can be studied using both psychological and sociological methods.

In addition, a biological approach can be employed. Because it evaluates a person’s biophysical traits from a central perspective, it is suitable for holistically studying their personality.

Although there are many distinct definitions of personality, most strongly emphasize the traits and behaviors that can be used to anticipate and justify a person’s behavior.

It includes anything from genetic reasons for personality traits to how experiences and surroundings affect one’s personality.

Is your personality something that you received from your family or something that developed through time as you went through various psychological adjustments and life-changing experiences?

The four primary determinants of personality, according to psychologists, are physical (biological/hereditary), social (the community you grew up in and your part in it), psychological (your behavior, emotions, and inner thought patterns), and intellectual (your values and beliefs).

The primary criterion that represents numerous aspects of a person’s personality is their biological composition. Being the primary factor in determining character, it also includes many additional elements that bring out numerous insights about an individual. Under the heading of “physical factors of personality,” some significant components include:

The psychological approach views personality as a distinctive style unique to each individual, one of the critical factors influencing personality. The accumulative traits of mental trends, emotions, sentiments, thought patterns, and complexes determine this particular style, which varies for each individual. Additionally, it investigates a person’s mental conflicts, desires, aspirations, repressed feelings, sublimation, and emotional health.

We are raised with cultural determinants of personality, just as we are born with biological ones. Family rituals and traditions, early conditioning, how we are nurtured, and the social groups we associate with are the elements that impact the development of our personalities. Every culture teaches and demands that its members act and breathe in a manner acceptable to the broader community.

As a result, critical cultural influences on personality determination include traits like hostility, independence, cooperation, and competition. Since the cultures in which we were raised are so opposed, it is obvious to separate those raised in the west from the residents of our nation.

The social determinants examine an individual’s personality in light of their position within their social group or community and consider how they see their place. The primary consideration in this method is that how others perceive us affects how we develop as people. Communication tools have been more widely available in this period, mainly through social media. Social media influencers can have a global impact on the masses.

Consequently, the social lives that people lead and are a part of greatly influence each person’s personality. Through interacting, whether online or in person, we contact a wide variety of people who, in some way or another, leave an impression on our personalities.

As soon as we leave playschool and enter the real world, the process begins when we interact with peers and friends, among other people. We are constantly urged to choose our social circle carefully because it is one of the critical factors in personality that our social life influences.

The situational category deserves special attention in our study of the numerous personality variables. You can understand how humans respond differently to various situations. Although it wouldn’t be accurate to argue that situational elements directly affect a person’s personality, it is undeniable that they do reflect a person’s behavior and response in a particular situation.

As different persons display various situational personality traits, the qualities revealed by situational conditions typically vary greatly. As an illustration, you might act differently in front of your supervisor at work than you would with friends at a party.

The primary factors contributing to our personalities are the family environment and parents’ direct impact. The impact of familial factors on nature is the greatest. Families influence, especially when children are young. A child raised in a warm, tolerant, and healthy environment will be different emotionally, socially cautious, and frigid.

Let’s examine the idea put forth by American-Australian psychologist Walter Mischel to comprehend the significance of parents and family as significant factors of personality:

Another crucial element that can significantly impact how our personalities develop is intelligence. Our character can be determined by how our intellect affects different facets and areas of our behavior. The following are the cognitive factors that affect personality:

How to write IGNOU AHE-01 Project ?