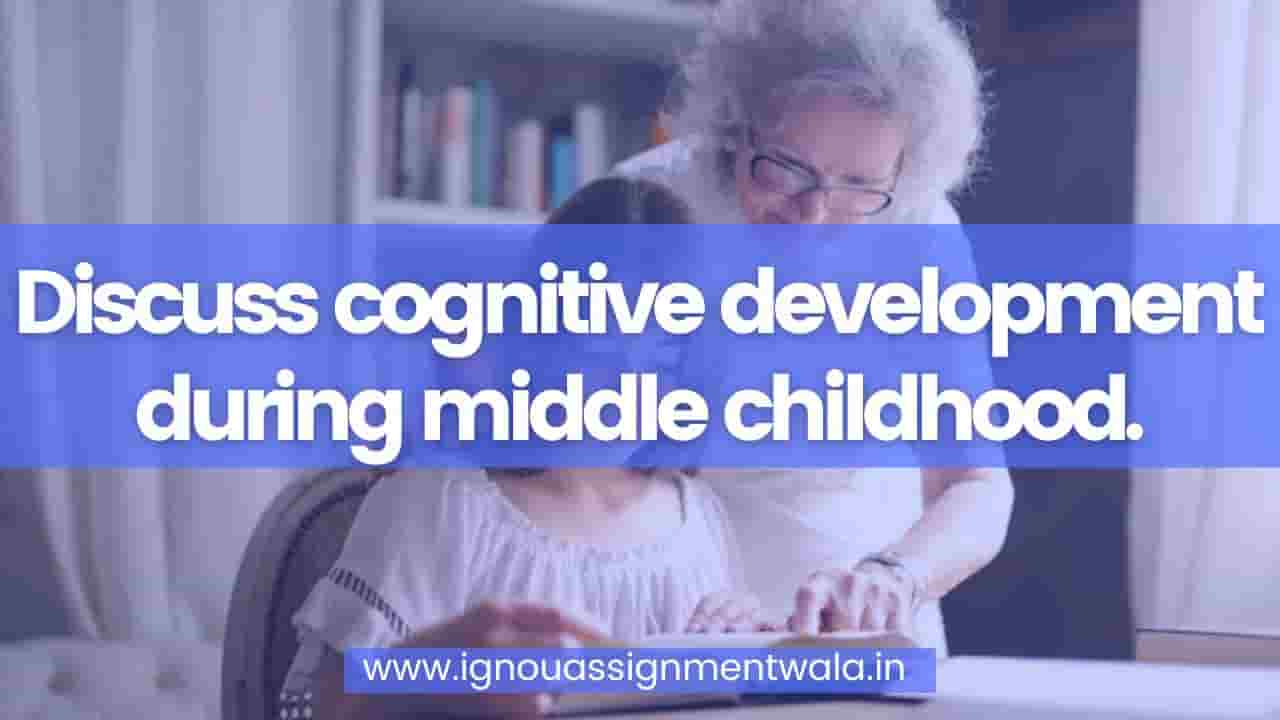 From ages 7 to 11, children are in what Piaget referred to as the concrete operational stage
of cognitive development (Crain, 2005). This involves maste1ing the use of logic in concrete ways.
The word concrete refersto that which istangible;that which can be seen, touched or experienced
directly. The concrete operational child is able to make use of logical principles in solving
problems involving the physical world. For example, the child can understand the principles of
cause and effect, size, and distance.
The child can use logic to solve problems tied to their own direct expe1ience but has trouble solving
hypothetical problems or considering more abstract problems. The child uses inductivereasoning,
which is a logical process in which multiple premises believed to be hue are combined to obtain a
specific conclusion. For example, a child has one friend who is rude, another friend who is also
mde, and the same is hue for a third friend. The child may conclude that friends are rude. We will
see that this way of thinking tends to change during adolescence being replaced with deductive
reasoning. We will now explore some of the major abilities that the concrete child exhibits.
Classification: As children’s experiences and vocabularies grow, they build schemata and are able
to organize objects in many different ways. They also understand classification hierarchies and
can arrange objects into a variety of classes and subclasses. 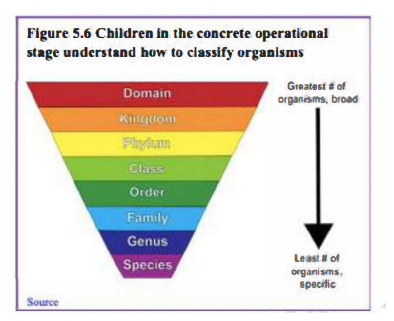 Identity: One feature of concrete operational thought is the understanding that objects have
qualities that do notchange even if the object is altered in some way. For instance, the mass ofan
object does not change by reananging it. A piece of chalk is still chalked even when the piece is
broken in two.
Reversibility: The child learns that some things that have been changed can be returned to their
original state. Water can be frozen and then thawed to become liquid again, but eggs cannot be
unscrambled. Arithmetic operations are reversible as well: 2 + 3 = 5 and 5 – 3 = 2. Many of these
cognitive skills are incorporated into theschool’s curriculum through mathematical problems and
in worksheets about which situations are reversible or ineversible.
Conse1vation: Remember the example in our last chapter of preoperational children thinking that
a tall beaker filled with 8 ounces ofwater was “more” than a short, wide bowl filledwith 8 ounces
ofwater? Concrete operational children can understand the concept of conse1vation which means
that changing one quality (in this example, height or water level) can be compensated for by
changes in another quality (width). Consequently, there is the same amount of water in each
container, although one is taller and na1Tower and the otheris sh01ier and wider.
Decentration: Concrete operational children no longer focus on only one dimension ofany object
(such as the height ofthe glass) and instead consider the changesin other dimensions too (such as
thewidth ofthe glass). This allows for conservation to occur.
Seriation: Ananging items along a quantitative dimension, such as length or weigl1t, in a
methodical way is now demonstrated by the concrete operational child. For example, they can
methodically airnnge a se1ies of different-sized sticks in order by length, while younger children
approach a similar task in a haphazard way.

These new cognitive skills increase the child’s understanding of the physical world, however
according to Piaget, they still cannot think in abstract ways. Additionally, they do not think in
systematic scientific ways. For example, when asked which variables influence the pe1iod that a
pendulum takes to complete its arc and given weights they can attach to strings in order to
do experiments, most children younger than 12 perfonn biased experiments from which no
conclusions can be drnwn (Inhelder & Piaget, 1958).
Infonnation Processing
Children differ in their memory abilities, and these differences predict both their readiness for
school and academic perfonnance in school (PreBler, Krajewski, & Hasselhom, 2013). Drning
middle and late childhood children make strides in several areas of cognitive function including
the capacity ofworking memory, their ability to pay attention, and their use ofmemory strategies.
Both changesin the brain and experience foster these abilities.
Working Memory: The capacity ofworking memory expands dming middle and late childhood,
and resea1ch has suggested that both an increase in processing speed and the ability to inhibit
i1nlevant information from entering memory are contJibuting to the greater efficiency of
working memo1y during this age (de Ribaupierre, 2002). Changes in myelination and synaptic
pruning in the c01tex are likely behind the increase in processing speed and ability to filter out
irrelevant stimuli (Kail, McBride-Chang, Ferrer, Cho, & Shu, 2013).
Children with learning disabilities in math and reading often have difficulties with working
memo1y (Alloway, 2009). They may struggle with following the directions of an assignment.
When a task calls for multiple steps, children with poor working memory may miss steps because
they may lose track of where they are in the task. Adults working with such children may need
to communicate: Using more familiar vocabulary, using sho1ter sentences, repeating task
instructions more frequently, and breaking more complex tasks into smaller more manageable
steps. Some studies have also shown that more intensive training of working memory
strategies, such as chunking, aid in improving the capacity of working memory in children
with poor working memo1y (Alloway, Bibile, & Lau, 2013).
Attention: As noted above, the ability to inhibit inelevant infonnation improves dming this age
group, with there being a sharp improvement in selective attention from age six into adolescence
(Vakil, Blachstein, Sheinman, & Greenstein, 2009). Children also improve in their ability to shift
their attention between tasks or different features of a task (Carlson, Zelazo, & Faja, 2013). A
younger child who is asked to s01t objects into piles based on type of object, car versus animal,
or color of object, red versus blue, may have difficulty if you switch from asking them to sort
based on type to now having them s01t based on color. This requires them to suppress the prior
s01ting rnle. An older child has less difficulty making the switch, meaning there is greater
flexibility in their attentional skills. These changes in attention and working memory
contribute to children having more strategic approaches to challenging tasks.
Memory Strategies: Bjorklund (2005) describes a developmental progression in the acquisition
and use ofmemo1y strategies. Such strategies are often lacking in younger children but increase
in frequency as children progress through elementa1y school. Examples of memory
strategies   include rehearsing infornation you wish to recall, visualizing and organizing information, creating
rhymes, such “i” before “e” except after “c”, or inventing acronyms, such as “roygbiv” to
remember the colors of the rainbow. Schneider, Kron-Sperl, and Hi.innerkopf (2009) reported a
steady increase in the use of memory strategies :from ages six to ten in their longitudinal study (see
Table 5 .2). Moreover, by age ten many children were using two or more memory starategies to
help them recall infornation. Schneider and colleagues found that there were considerable
individual differences at each age in the use of strategies, and that children who utilized more
strategies had better memory performance than their same aged peers.

Is IGNOU valid or not ?