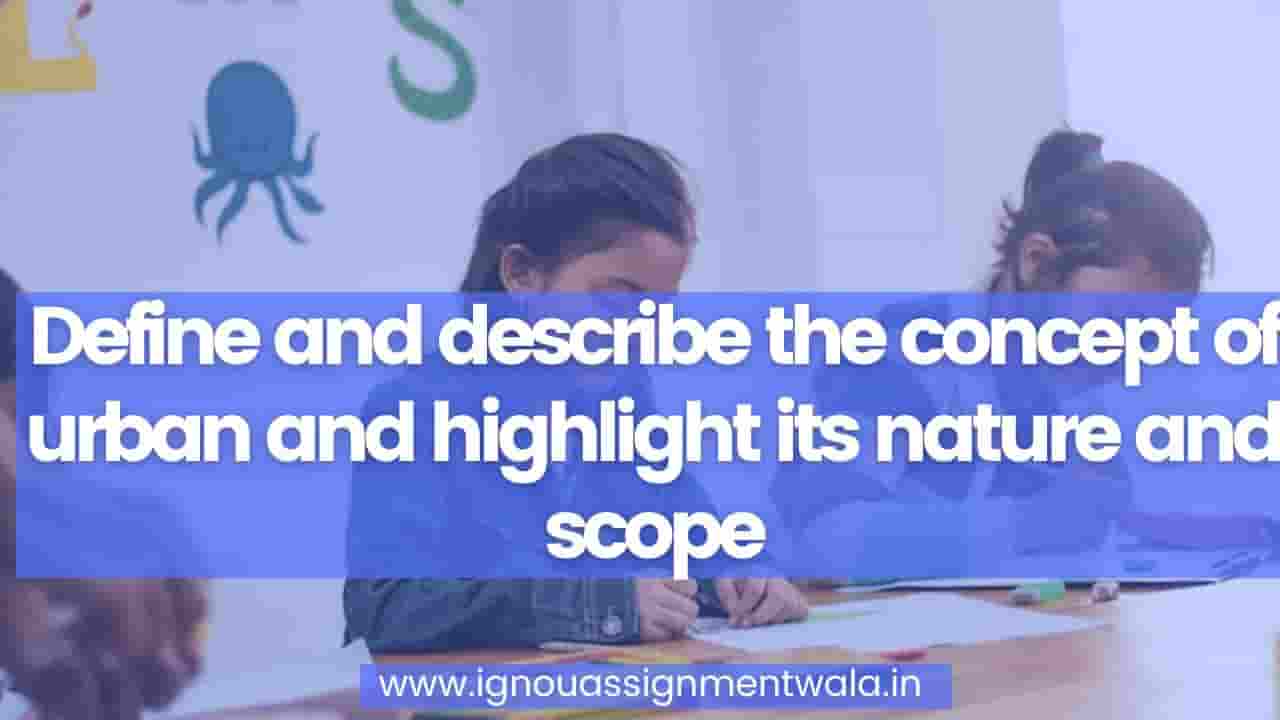 The nature and scope of urban sociology, however, is vast and multidimensional. It deals with almost all the aspects of city life. “The city is not merely the point at which great numbers of people are concentrated in limited space, but it is also a complex heterogeneity in almost every characteristic in which human beings can differ from one another. In this respect, the city represents perhaps the most striking contrast to the social entities that we call primitive, folk, and peasant societies. Consequently, the methods adapted to the understanding of the population of the metropolis are strikingly different from those suited to simpler and more homogeneous societies. This accounts for the fact that in attempting to understand the city we have had to resort to extensive statistical inquiries to determine the human elements of which it is composed. They differ, as do all societies, in sex and age, but they show peculiar distribution of age and sex groups and great variations in these respects as we pass from area to area. They differ widely from one another in occupation, in view of the more extensive division of Labor, which the growth of the market has made possible. They differ in wealth and in income, ranging from the extreme of affluence to the depths of the direst poverty and insecurity. The city, moreover, by virtue of its focal position in the complex of capitalistic civilization, has attracted within its confines the racial and ethnic stocks of all the world and has more or less amalgamated them and blended their traits into a new aggregate of hybrids, here mingling with one another and there segregating themselves from one another, here collaborating and there at war, but in any case building a complex of cultures unprecedented in human history. This heterogeneity of the human materials in the city is at once a source of ferment and stimulation and of the frictions and conflicts that characterize modern society” (Louis Wirth 1940).

Urban studies was first initiated by a popular social scientist Patrick Geddes in the University of Mumbai in 1915. Later, the study of urban problems was also taken up by geographers and sociologists in 1920. However, substantial progress in researches on urban problems was done in the post-independence period. The Indian Council of Social Science Research (ICSSR) sponsored researches on urban problems in areas of geography, sociology, economics, public administration etc. Due to very low level of urbanization, the distinction between rural and urban sociology was not meaningful in India. In addition, there was no dichotomy between the traditional city and the village in the Indian context, as both were having the elements of same civilization, such as, caste, kinship, family etc. It was only after the 1951 Census, which indicated a high rate of growth of urban population in India that social scientists began to take real interest in urban studies. The interest continued unabated during the seventies. Consequently, urban sociology gained importance, and problems of rural— urban migration, urban development and other related areas such as demography, neighborhoods, slums, social stratification, education, ethnic conflict and movements, kinship, religion, politics, economy, social problems, and impact of urbanization on rural areas attracted the attention of the sociologists and social anthropologists (Rao 1982). During the eighties as well as nineties, there were many studies on urbanization patterns and trends, but issues pertaining to metropolitization and regional planning remained inadequately explored. Migration studies also highlighted the all-India trends as well as regional studies on different aspects of slums and squatter settlements received due attention. The National Commission on Urbanization (NCU) report, published in five volumes, highlighted the problems of urbanization at the grassroots, sub-state and state levels. NCU noted that urbanization is a phenomenon of unique scope and dimension that can change the nature of our lives fundamentally. This decade also saw some valuable studies on slums and squatter settlements such as:Kaldate 1989; Dhadave 1989; Sandhu 1989; Rao R.N. 1990; Das 1993; Desai 1995; De wit 1996; Purewal 2000; Lobo and Das 2001. In addition to this, many other publications appeared as conferences and seminars volumes on different aspects of urbanization such as human settlements, urban poor and sustainability of human settlements. Some of the important works are Mohanty 1993; Didde and Rangaswamy 1993; Roy and Das Gupta 1995; Kundu 2000; Sandhu et al, 2001; Sharma and Sita 2001. The 21st century is the century of urbanization; we must realize that within next 20 years alone i.e. between 2001-2021, India’s urban population would more than double itself to reach the figure of 618 million (Government of India).

NATURE AND SCOPE OF URBAN SOCIOLOGY

Urban sociology is one of the broadest and most eclectic of all sociological fields. It relies on the related sciences and borrows from history, economics, social psychology, public administration and social work. It tends to overlap geography with its emphasis on spatial distribution of social institutions and social groups within the city; political science, with its emphasis on political behavior, power and with decision making; economics, with its perspective on public policy, taxation, and public expenditures; and anthropology with respect to culture of groups.

As stated already, the subject-matter of sociology is cities and their growth, and it deals with such problems like planning and development of cities, traffic regulations, public waterworks, social hygiene, sewerage works, housing, beggary, juvenile delinquency, crime and so on. Thus the scope of urban sociology becomes wider as it not only tries to study the urban setup and facts but also tries to give suggestions to solve problems arising out of dynamic nature of the society. In many ways the interests of urbanologist (A specialist in urban sociology) and ecologist also overlaps with those of town and city planners, social workers, various other specialists in education, race relations, housing, and urban development and rehabilitation (Gist, 1957). Therefore there is a need to clarify/redefine many basic concepts in the field: community, ecology, city, urban, urbanism, urban society, urbanization, industrialization, modernization and so on. Community: The term has many meanings. Sometimes it is used to denote a common habitat or the totality of all persons living in the same area. Frequently the term indicates more than merely a locality or its residents. Davis, for instance, stresses what he calls “social completeness”. Accordingly, he defines a community, as “the smallest territorial group that can embrace all aspects of social life …It is the smallest social local group that can be, and often is, a complete society”. McIver and Page approach the problem from a somewhat different angle, emphasizing relationships rather than social organization: “The basic criterion of community … is that all of one’s social relationships may be found within it.” We can indeed speak of a community if common habitat creates positive emotional ties between all – residents or at least all groups of residents. It is characterized by feeling of belongingness and friendly feeling towards each other, cooperation is promoted and community can fulfil all its functions. Ecology: It was Robert E. Park who appropriated the principles of natural science (ecology) for the analysis of urban spaces (urban ecology) (Flanagan, W. 1993). In simple words, ecology is the science, which studies the relationship between living things and the environment .The city like any other environment, is a conditioning rather than a determining factor. Urban ecology refers to an idea that emerged out of the Chicago School that likens urban organization to biological organisms. Urban ecology has remained an influential theory in both urban sociology and urban   anthropology over time. The theory is essentially an extended metaphor that helps to explain how conflicting subgroups exist in shared urban spaces and systems. Like biological systems, urban subgroups are dependent on one another for healthy functioning and are also dynamic—that is, they flourish and decline based on political, economic, and social tides. Relating this to functionalist theory, one can look at immigration and emigration trends. As people enter and leave a country, they are dependent upon one another, as well as the new culture, to assimilate and enter into a new society. Immigrants become emigrants and vice-versa; in this way, the chain of life continues in terms of societal relations. Any thorough discussion of the development of urban sociology must explain difference between the two organizing topics in the field: urbanization and urbanism. Urbanization refers to the origins of cities and the process of city building. What people migrate from rural areas to the cities; due to pull or push factors; temporarily or permanently; the process of urbanization takes place. In practice, urbanization refers both to the increase in the percentage of population residing in urban areas and to the associated growth in the number of urban dwellers, in the size of cities and in the total area occupied by urban settlements. It studies the way social activities locate themselves in space and according to interdependent processes of societal development and change. Urbanism, in contrast, studies the ways of life that may be found within the urban community. It deals with culture, with meanings, symbols, patterns of daily life, and processes of adjustment to the environment of the city, but also with social conflict and political organization at the street, neighborhood, and city levels. As believed by Louis Wirth; it is a way of life distinct from the life in the rural areas. The philosophical foundations of modern urban sociology originate from the work of sociologists such as Karl Marx, Ferdinand Tönnies, Émile Durkheim, Max Weber and Georg Simmel who studied and theorized the economic, social and cultural processes of urbanization and its effects on social alienation, class formation, and the production or destruction of collective and individual identities. These theoretical foundations were further expanded upon and analyzed by a group of sociologists and researchers who worked at the University of Chicago in the early twentieth century. In what became known as the Chicago School of sociology the work of Robert Park, Louis Wirth and Ernest Burgess on the inner city of Chicago revolutionized not only the purpose of urban research in sociology, but also the development of human geography through its use of quantitative and ethnographic research methods. The importance of the theories developed by the Chicago School within urban sociology have been critically sustained and critiqued but still remain one of the most significant historical advancements in understanding urbanization and the city within the social sciences. The discipline may draw from several fields, including cultural sociology, economic sociology, and political sociology.

Tags: Define and describe the concept of urban and highlight its nature and scope