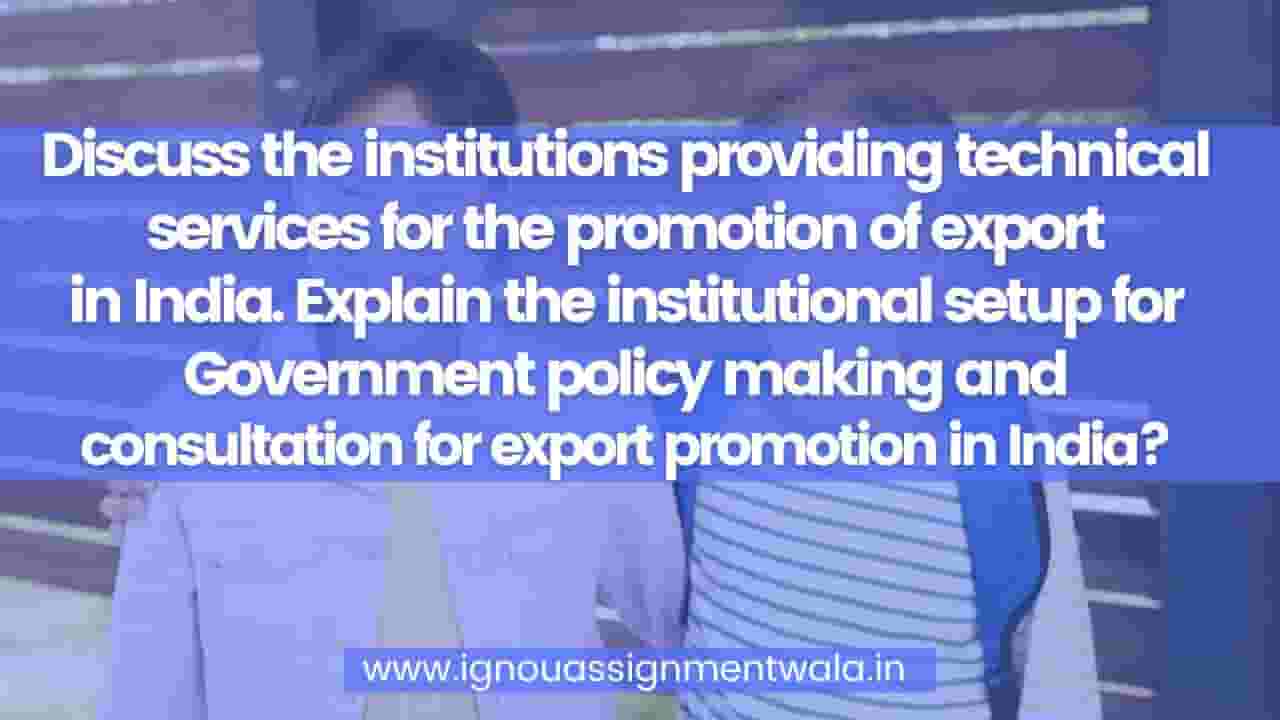 Discuss the institutions providing technical services for the promotion of export
in India. Explain the institutional setup for Government policy making and
consultation for export promotion in India.

Appropriate government policies are important for successful export effort. In view of the
increasingly important and critical role of foreign trade in economic development, a separate
Ministry of Commerce has been entrusted with the responsibility of promoting India’s interest
in international market. The Department of Commerce, in the Ministry of Commerce has
been made responsible for the external trade of India and all matters connected with the same.
The main functions of the Ministry are the formulation of international commercial policy,
negotiation of trade agreements, formulation of country’s export-import policy and their
implementation. It has created a network of commercial sections in Indian embassies and
high commissions in various countries for export-import trade flows. It has set up an
“Exporters Grievances Redressal Cell” to assist exporters in quick redressal of grievances

Board of Trade : For ensuring a regular consultation, monitoring and review of India’s
foreign trade policies and operations, Government of India have set up a Board of Trade with
representatives from Commerce and other important Ministries, Trade and Industry
Associations, and Export Service Organisations. It is an important national platform for a
regular dialogue between the Government and the trade and industry. The deliberations in
the Board of Trade provide guidelines to the Government for appropriate policy measures for
corrective action.

Grievances Cell : Grievances Cell has been set up to entertain and monitor disposal of
grievances and suggestions received. It is a cell meant for speedy redressal of genuine
grievances. Grievances Committees headed by Director General of Foreign Trade and head
of concerned Regional Licensing Authority have been constituted in the respective licensing
offices. The Committee also include representatives of FIEO, concerned Export Promotion

Council Commodity board and other departments and organisations.

Director General of Foreign Trade (DGFT) : DGFT is an important office of the Ministry
of Commerce, to help the formulation of India’s Export-Import Policy and
thereof. It has set up regional offices in almost all States and Union Temtories of India.
These offices are known as Regional Licensing Authorities. There is an Export
Commissioner in the DGFT office who functions as a nodal point for all export promotion
schemes. The Regional Licensing offices also act as Export facilitation centres.

Ministry of Textiles : Ministry of Textiles is another Ministry of Government of India which
is responsible for policy formulation, development, regulation and export promotion of textile
sector including sericulture, jute and handicrafts, etc. It has a separate Export Promotion
Division, offices, advisory boards, development corporations, Export Promotion Councils and
Commodity Boards. The advisory boards have been constituted to advise the government in
the formulation of the overall development programmes in the concerned sector. It also
devises strategy for expanding markets in India and abroad. The four advisory boards are as
under :
1. All India Handloom Board
2. All India Handicrafts Board
3. All India PStates Cell : The cell has been created under Ministry of Commerce. Its functions are to act
as a nodal agency for interacting with State Governments or Union Territories on matters
concerning export or import from the States or Union Temtories. It provides guideline to
State level export organisations. It assists them iq the formation of export plans for each
cases.
Development Commissioner, Small Scale Industries Organisation : The Directorate, has
the headquarter in New Delhi and extension centres located in almost all States and Union
Territories. They provide export promotion services almost at the doorsteps of the small scale
industries and cottage units. The important functions are :
i) to help the small scale industries to develop their export capacities
ii) to organise export training programmes
iii) to collect and disseminate information
iv) to help such units in developing their export markets
v) to take up the problems and other issues relate”d to small scale industries owerloom Board
4. Wool Development Board

Export marketing effort at the individual corporate level also needs to be reinforced through a
number of technical and specialised service inputs. These cover important and crucial areas
like packaging, quality control, risk coverage, promotion and finance. Let us now discuss
them in detail.