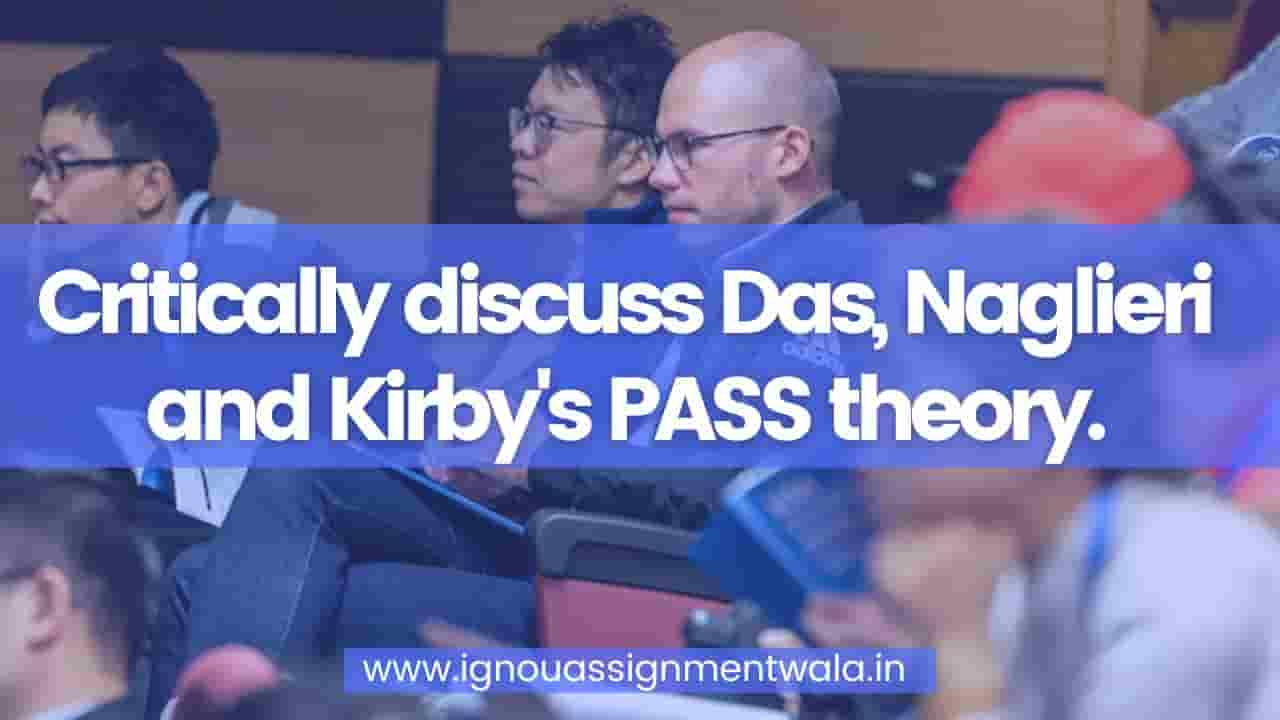 The Planning, Attention-Arousal,   Simultaneous   and   Successive   (PASS)   theory of intelligence, was developed by Das, Naglie1y and Kirby (1994). PASS theory is useful to link PASS processes to the brain. The linking of PASS processes to brain becomes helpful, for example, in understanding the loss of sequential and planning functions due to aging in a study of individuals with Down’s Syndrome. The PASS theory provides the theoretical framework for a measurement inst:nnnent called the Das-Naglieri.

The theo1ies of Speannan are based on isolating factors after administe1ing several intelligence tests over a large sample of subjects. They did not take into account how an input. TI1is theory has taken its inspiration from the Pionee1ing neuropsychological researches of Alexander Luria. Luria described human cognitive processes within the framework of three functional units.

Planning is a frontal lobe function. It is, more specifically, associated with the prefrontal cortex and one of the main abilities that distinguishes humans from other primates.

The prefrontal cortex plays a central role in fo1ming goals and objectives and then in devising plans of action required to attain these goals. It selects the cognitive skills required to implement

the plans, coordinates these skills, and applies them in a correct order. Finally, the prefrontal cortex is responsible for evaluating our actions as success or failure relative to our intentions.

Planning, therefore, helps us achieve through the selection or development of plans or strategies needed to complete tasks for which a solution is needed and is critical to all activities where the child or adult has to determine how to solve a problem. This includes generation, evaluation, and execution of a plan as well as self-monitoring and impulse control.

Thus, Planning allows for the solution of problems, control of attention, simultaneous, and successive processes, as well as selective utilization of knowledge and skills.

Attention is a mental process that is closely related to the 01ienting response. The base of the brain allows the organism to direct focused selective attention toward a stimulus over time and resist loss of attention to other stimuli. The longer atention is required the more the activity can be one

that demands vigilance. Attention is controlled by intentions and goals and involves knowledge and skills as well as the other PASS processes.

Next, Knowledge base is closely associated with the PASS model and all processes are found within this framework. Knowledge base of the PASS model represents all info1mation obtained from the cultural and social background and throws light on vaiious parts of behaviour. Simultaneous Processing is essential for organization of infonnation into groups or a coherent whole.

The paiieto-occipital-temporal brain regions provide a c1itical ability to see patterns as inteITelated elements. Planning processes provide for the programming, regulation and ve1ification of behaviour and ai·e responsible for behaviors, such as asking questions, problem solving, and the capacity for self-monitoring.

Successive Processing is involved with the use of stimuli atTanged in a specific serial order. Whenever infonnation must be remembered or completed in a specific order successive processing will be involved. Impo1tantly, however, the info1mation must not be able to be organized into a pattern (like the number 9933811 organized into 99-33-8-11) but instead each element can only be related to those that precede it.

The PASS theory is ai1 alternative to approaches to intelligence that have traditionally included verbal, nonverbal, and quantitative tests. Not only does this the01y expand the view of what “abilities” should be measured, but it also puts emphasis on basic psychological processes and precludes verbal achievement like tests such as vocabnlaty.

Additionally, the PASS theory is an alternative to the anachronistic notion ofa general intelligence. Instead, the functions of the brain are considered the building blocks of ability conceptualized within a cognitive processing framework. While the theory may have its roots m neuro­ psychology, its brai1ches are spread over developmental and educational psychology.

Tims PASS themy of cognitive processing, with its links to developmental and neuro-psychology, provides an advru1tage in explanat01y power over the notion of general intelligence.

It tests intelligence as a set of cognitive processes.

The PASS theory of intelligence examines what the major processes aTe.

The PASS theory of intelligence guides us in the remediation ofpreparing troubles.

Cognition is a dynamic methodology that works inside the setting of the singular’s knowledge base, reacts to, his encounters, and is liable to developmental varieties. When we measure the Cognition processes then concerned the effective processing.

Despite the fact that these methodologies are intenelated and persevering, they are not just as included in all assigmnents. Therefore, cog nitive evaluation enands for planning, attention, simultaneous, and successive processing were produced to hold fast to PASS theory and prevalently require a particular cognitive process.

Children in the age group of 8 to 17 years, Ability/achievement, Ability/reading and ability/ mathematics n01mative taxonomies for reading and mathematics were developed from the PASS theory scales of the CAS (Cognitive Assessment System). Fmther, eight pemsing and five math bunches were recognized and depicted utilizing demographics and generally speaking capacity and accomplishment levels.